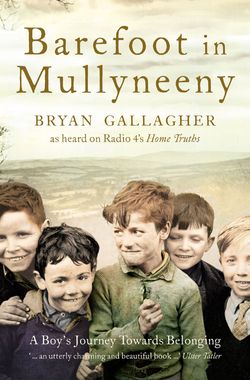 Bryan Gallagher’s reminiscences of the Ireland of his youth, first heard on Radio 4’s ‘Home Truths’, transport you to a world of boyhood pranks, playground politics and the confusion of growing up in a land that is every bit as magical and captivating as the stories he has to tell.

Barefoot in Mullyneeny is Bryan Gallagher’s evocative tale of a childhood remembered through the people and landscape of Fermanagh, near the beautiful shores of Lough Erne in Ireland. Bryan chronicles a time when all the big boys went to school in bare feet and secretly watched the Saturday night bands and dances in halls lit by Tilley lamps; where it was known to be nothing less than the biblical truth that if you put a horse-hair across the palm of your hand when you were about to be punished at school, the cane would split in two.

Gallagher’s writing will touch the hearts of those who long for the innocence of childhood and the simplicity of an era long past. Whether relating tales of murderous bicycle chases through the darkened streets of Cavan, of ghosts and fairy forts or the anguish of emigration, this remarkable memoir vividly recreates life in rural Ireland in the 1940s and 50s.

For those who thought that life in Ireland was one of poverty and misery, Barefoot in Mullyneeny offers a view of the Ireland of yesteryear that combines the touching, homely nostalgia of Nigel Slater’s Toast and Laurie Lee’s Cider with Rosie with a humorous optimism that is unmistakably Ireland at its best.

Bryan Gallagher is a retired headmaster who has spent his whole life living in the county of Fermanagh, Ireland, near the beautiful shores of Lough Erne. Bryan lives with his wife Maeve in Enniskillen and they have five children: two daughters, Ciara and Rhiana, as well as three sons, Bryan Og, Declan and Garvan. Bryan still plays for his band, and the three boys join their father on stage on the very special occasions when the Starlight Band is reformed. Bryan Gallagher can now be heard as a regular columnist on Home Truths on Radio 4.