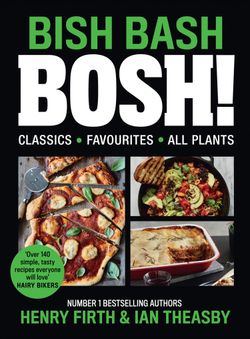 Do you want a quick weeknight supper that gets more veg into your diet? A show-stopping vegan summer barbecue? A fun, fresh meal plan to set you up with plant-based packed lunches? Whatever you’re after, BISH BASH BOSH! has the perfect recipe.

Henry and Ian have created a food revolution through the world’s biggest plant-based platform. Their first cookbook, BOSH!, is the highest-selling vegan cookbook ever, and with over 2 million followers across all their fast-growing channels, BOSH! are on a mission to show the world just how versatile veg can be.

In BISH BASH BOSH! you’ll discover a whole world of quick eats, weeknight suppers, showstopping feasts, and incredible sweet treats – all using the power of plants. From a hearty, classic lasagne to an indulgent mini banoffee meringue, and from quick quesadillas to an incredible curry house jalfrezi, these are simple, savvy recipes that you’ll turn to time and again.

Whether you are a committed vegan, trying plant-based food for the first time, or simply just want to try a meal a week without meat, this book has all the know-how and inspiration you need.