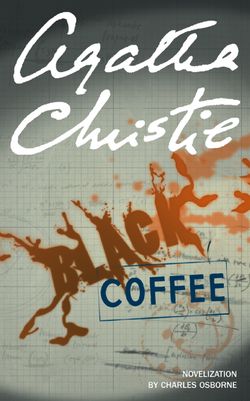 Sir Claud Amory’s revolutionary new formula for a powerful explosive is stolen. Locking his house-guests in the library, Sir Claud switches off the lights to allow the thief to replace the formula, no questions asked. When the lights come on, he is dead, and Hercule Poirot and Captain Hastings have to unravel a tangle of family feuds, old flames and suspicious foreigners to find the killer and prevent a global catastrophe.

BLACK COFFEE was Agatha Christie’s first playscript, originally performed in 1930 and made into a now rarely-seen film the following year. Combining her typically beguiling plot and sparkling dialogue with his own faithful narrative, Charles Osborne’s novelisation is ‘A worthy addition to the Christie canon’ (The Spectator)

Agatha Christie was born in Torquay in 1890 and became the best-selling novelist in history. Her first novel, The Mysterious Affair at Styles, introduced us to Hercule Poirot, the most popular detective since Sherlock Holmes. She is known throughout the world as the Queen of Crime and her works have sold over two billion copies – 80 crime books, 19 plays, and six novels under the name of Mary Westmacott.Charles Osborne was born in Brisbane in 1927. He is known internationally as an authority on opera, though has had a lifelong passion for Agatha Christie’s works. His previous books include the newly revised and reissued The Life and Crimes of Agatha Christie.