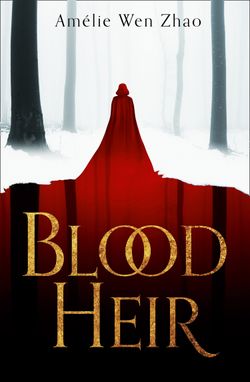 BLOOD HEIR is the first book in an epic new series about a princess hiding a dark secret and the conman she must trust to clear her name of murder.

Ana has lived her life in safety, hidden behind palace walls, but that wasn’t just for her own protection.

She is one of the Affinites, people reviled for their magical gifts, which allow them to control the world around them. And Ana, the crown princess of Cyrilia, has an Affinity to blood.

After her father’s brutal murder, all evidence points to Ana. If she’s to have any hope of clearing her name she’ll need help. And there is only one person corrupt enough to help her – Ramson Quicktongue.

A cunning, smooth-talking crime lord of the Cyrilian underworld, Ramson has his own sinister plans – though he might have met his match in Ana.

Because in this story, the princess might be the most dangerous player of them all.

Amélie (yes, like the movie!) has adored putting pen to paper since she was in kindergarten. Born in Paris and raised in a multicultural community in Beijing, Amélie has a bone-deep love for traveling and immersing herself in new worlds and cultures. She lives in New York City, working as a full-time financial professional by day, and writer at night.She hopes to empower young readers with messages of acceptance, strength, and courage through her works, and to continue to push the boundaries of young adult literature by exploring new, cross-cultural themes.