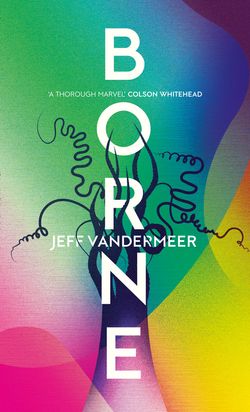 A FINANCIAL TIMES BOOK OF THE YEAR

The dark, dangerous, funny and uplifting new novel from the author of Annihilation, the inspiration for the major motion picture directed by Alex Garland.

“Am I a person?” Borne asks Rachel, in extremis.
“Yes, you are a person,” Rachel tells him. “But like a person, you can be a weapon, too.”

A ruined city of the future lives in fear of a despotic, gigantic flying bear, driven mad by the tortures inflicted on him by the Company, a mysterious biotech firm. A scavenger, Rachel, finds a creature entangled in his fur. She names it Borne.

At first, Borne looks like nothing at all― a green lump that might be a discard from the Company. But he reminds Rachel of her homeland, an island nation long lost to rising seas, and she prevents her lover, Wick, from rendering down Borne as raw genetic material for the special kind of drugs he sells.

But nothing is quite the way it seems: not the past, not the present, not the future. If Wick is hiding secrets, so is Rachel―and Borne most of all. What Rachel finds hidden deep within the Company will change everything and everyone. There, lost and forgotten things have lingered and grown. What they have grown into is mighty indeed.

Jeff VanderMeer is an award-winning novelist and editor, and the author most recently of the New York Timesbestselling Southern Reach Trilogy. His fiction has been translated into twenty languages and has appeared in the Library of America’s American Fantastic Tales and multiple year’s-best anthologies. He grew up in the Fiji Islands and now lives in Tallahassee, Florida, with his wife.