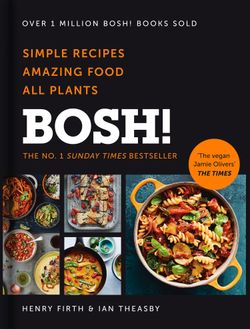 Lifestyle Non-Fiction Book of the Year 2019

‘The vegan Jamie Olivers’ The Times

Want to cook ridiculously good plant-based food from scratch but have no idea where to start? With over 140 incredibly easy and outrageously tasty all plants meals, BOSH! The Cookbook will be your guide.

Henry Firth and Ian Theasby, creators of the world’s biggest and fastest-growing plant-based platform, BOSH!, are the new faces of the food revolution.

Their online channels have over 2.3 million fans and constantly inspire people to cook ultra-tasty & super simple recipes at home. Always ensuring they stick to fresh, supermarket-friendly ingredients, BOSH! truly is “plant-based food for everyone”.

The book is jam-packed with fun, unpretentious and mega satisfying recipes, including Creamy Mac and Greens, Burrito Samosas, the Big Bhaji Burger, the World’s Best Pesto Lasagne, Satay Sweet Potato BOSH! Bowl, Spanish Beach Churros, Gooey PBJ Brownies and Salted Caramel Chocolate Crunch Tart, all easy enough to be rustled up any night of the week. It’s enough to convince the staunchest of carnivores to give plants a whirl.

Whether you’re already sold on the plant-based lifestyle or you simply want to incorporate more meat, dairy and egg-free meals into your week, BOSH! The Cookbook is your plant-based bible.