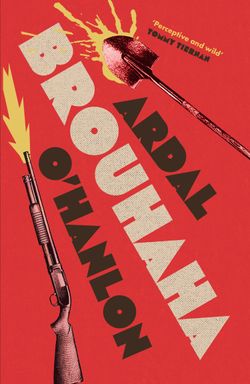 Dove Connolly is dead. That’s not good for anyone in Tullyanna, never mind Dove.

Now his best friend Sharkey is home asking awkward questions about Dove’s death, about the strange graphic novel he left behind, and, most of all, about Sandra. Sandra Mohan. Missing now for over a decade, whereabouts unknown.

This, however, is a town dead-set on keeping its secrets. And Sharkey is already drawing attention from all the wrong quarters…

A mystery, a black comedy, a satire on Ireland’s tangled politics of memory, Brouhaha is set in a small town on the Irish border during the uneasy transition to peace. And peace doesn’t come easy in these parts.

*****
Over the past few days, Kevin, no flies on him, had sensed a tension in the town thanks to Dove Connolly’s poor decision to blow his own head off. It wasn’t just the act of self-harm itself, the pointless splattering of blood and bone and brain all over his bedroom wall, that was the issue, unsettling as that was. In so doing, poor Dove had spread panic amongst the townspeople, raising all sorts of ugly questions, reviving all sorts of rumours, and inviting all sorts of unwelcome attention upon them. In Kevin’s mind, there was method in Dove’s madness. Showing a shocking assertiveness for possibly the first time in his life, and the last, says you, Dove blew the lid off the whole town.

Ardal O’Hanlon is an actor, comedian, writer, and documentary filmmaker. A star of several high-profile television series, including Death in Paradise, My Hero, and the BAFTA-winning Father Ted, he is also the author of the critically acclaimed novel Talk of the Town (1998). He lives in Dublin, Ireland.