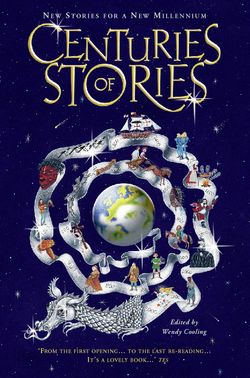 An anthology of twenty specially commissioned stories from top children’s authors, each story set against the background of one of the last twenty centuries.

Each story is fictional but set against the background of one particular time and place in one century. Settings are worldwide, and include England, Ireland, Scotland, Wales, France, China, America and Africa. Story themes range from the Crucifixion to Space Exploration; Romans in Britain to the Mongols in China; Irish saints to medieval monks; the Vikings, Saxons as well as elves, fairies and giants.

A range of genre from humour to fantasy make this a brilliantly balanced collection with something to suit every taste.

Specially commissioned by Wendy Cooling, a highly respected and well-known anthologist. This collection promises to be around for years to come and will be a treasured gift for adults and children alike.

Wendy Cooling has been a teacher, Head of Children’s Book Foundation and is now well-known as a freelance children’s book consultant and anthologist. She appears regularly on radio and television, talking about Children’s Books; works across the country with teachers; librarians and the inspectorate on literacy matters and began the Book Start project which has been taken up nationally. Wendy works with a variety of publishers too, compiling booklist and advising on literacy and educational matters.