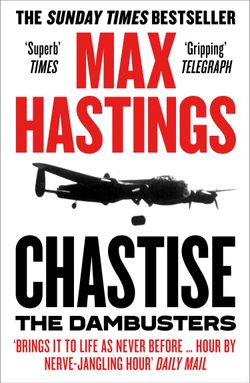 A masterly history of the Dambusters raid from bestselling and critically acclaimed Max Hastings.

Max Hastings tells the gripping story of the Dambusters raid, from the invention of the bouncing bomb to the moonlit cockpits of young pilots flying at treetop height through lethal enemy fire. But Hastings also challenges what we think we know about the Dambusters, bringing to light the difficult truths that have often been left out of the legend.

‘Superb … The heroes shine, but their achievement haunts’ Times

‘A virtuoso performance from a veteran military historian. It is a white-knuckle narrative that brings clarity and insight to a much-loved tale, as well as offering a vital corrective to the drum-thumping conclusions of earlier books’ Sunday Times