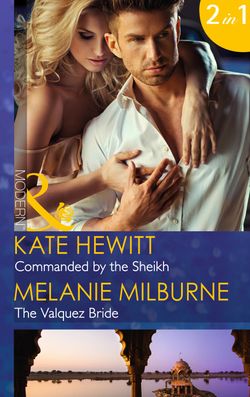 COMMANDED BY THE SHEIKH
‘I can’t let the public find out. I need someone else. You.’

Sheikh Aziz al Bakhir needs someone trustworthy to impersonate his missing fiancée, so the lothario of Europe demands his housekeeper, Olivia Ellis, fill the role!

Olivia can no longer hide – from the public or the Sheikh’s silver gaze. As ruthless as his desert ancestry, Aziz crashes through Olivia’s reluctance, making her his Queen in public… and lover in bed!

Untouched Theodora Marlstone wanted the fairytale wedding – a white dress and adoring groom – not a marriage of convenience. Argentinian Alejandro Valquez promises raw sensuality, not devotion, but her father’s will means Teddy must say ‘I do’…

Alejandro has never wanted a wife, but Teddy is a delicious present waiting to be unwrapped – it’s clear that this union will burn the very paper it’s written on!