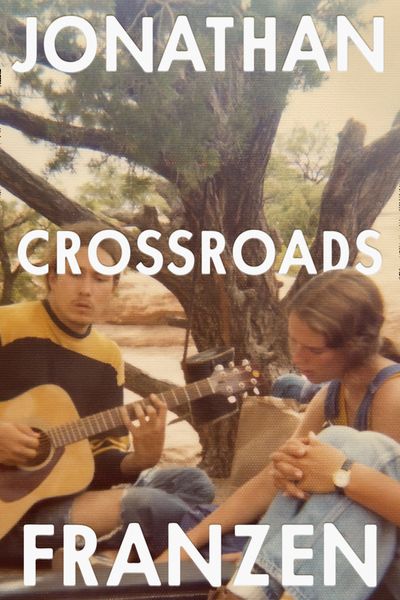 ‘His best novel yet … A Middlemarch-like triumph’ Telegraph

Set in a historical moment of moral crisis, Crossroads is the stunning foundation of a sweeping investigation of human mythologies, as the Hildebrandt family navigate the political and social crosscurrents of the past fifty years

It’s December 23, 1971, and heavy weather is forecast for Chicago. Russ Hildebrandt, the associate pastor of a liberal suburban church, is on the brink of breaking free of a marriage he finds joyless – unless his wife, Marion, who has her own secret life, beats him to it. Their eldest child, Clem, is coming home from college on fire with moral absolutism, having taken an action that will shatter his father. Clem’s sister, Becky, long the social queen of her high-school class, has sharply veered into the counterculture, while their brilliant younger brother Perry, who’s been selling drugs to seventh-graders, has resolved to be a better person. Each of the Hildebrandts seeks a freedom that each of the others threatens to complicate.

Jonathan Franzen’s novels are celebrated for their unforgettably vivid characters and their keen-eyed take on the complexities of contemporary America. Now, for the first time, in Crossroads, Franzen explores the history of a generation. With characteristic humour and complexity, and with even greater warmth, he conjures a world that feels no less immediate.

A tour de force of interwoven perspectives and sustained suspense, Crossroads is the story of a Midwestern family at a historical moment of moral crisis. Jonathan Franzen’s gift for melding the small picture and the big picture has never been more dazzlingly evident.

”'[Franzen’s] talents as a comic storyteller are such that his capacious tales are a treat to get lost in. This one is no exception … This is a novel whose momentum often derives from the altered states of its characters — obsession; intoxication; lust; religious fervour; mania — and the humour is usually of the painful variety as their lives uniformly crumble and they agonise over how — or indeed whether — to be good” - Daily Mail

”'In Crossroads, Jonathan Franzen goes back to family-anatomising basics - and it's his best novel yet … The result is a Middlemarch-like triumph” - Telegraph

”'Franzen has laid the ground beautifully, and his first act is intoxicating - a luxuriant domestic drama that opens out into politics, running against the grain of the counterculture with its focus on the friction between conservatism and radicalism, Christianity and social activism” - Guardian

”'Crossroads is classic Franzen fodder: a slice of suburban life ripe not for satire but for the far deadlier scrutiny that comes from taking it seriously” - New Yorker

”'A mellow, marzipan-hued ’70s-era heartbreaker. Crossroads is warmer than anything [Franzen has] yet written, wider in its human sympathies, weightier of image and intellect” - New York Times Book Review

”'The compelling dialogue, the authenticity of place, time and character, the assured insights and the exquisite minutiae of description, all confirm that the reader is in the hands of a true modern master … a simply stunning novel” - iNews