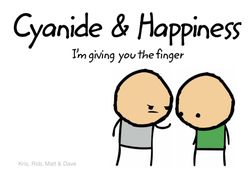 A laugh-out-loud and exceedingly irreverent collection of comics from the #1 hit web comic, Cyanide and Happiness. Complete with 150 of their funniest classic comics as well as well as 30 brand new ones.

Rob D., Matt, Dave and Kris have been drawing the #1 hit web comic, CYANIDE AND HAPPINESS, since 2005. Loaded with inappropriate jokes, irreverent characters, and deviant behaviour, stick figures have never been more twisted.

Now, for the first time, fans can get CYANIDE AND HAPPINESS: I’M GIVING YOU THE FINGER, an exclusive collection of 150 classic comics as well as 30 brand new, never-before-seen strips. You’ll laugh out loud at trademark characters like Superjerk, Ass Rape Man, Obese Maurice, and the Purple-Shirted Eye Stabber.

Rob D., Matt, Dave and Kris have been collaboratively drawing the online webcomic CYANIDE AND HAPPINESS since 2005, though they didn’t actually meet each other until 2007. Rob is from Texas, Matt is from California, Dave is from Belfast, and Kris is from Wyoming.In addition to having the number one comic on the web, they have also contributed their art to the Orange Ad campaign promoting Orange Wednesdays.