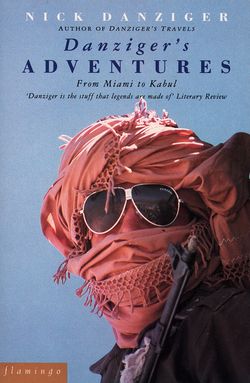 From Miami to Kabul

In his remarkable first book, Danziger’s Travels, Nick Danziger journeyed incognito through Iran, Afghanistan and China. Now we learn what Danziger did next: more extraordinary episodes as he swings from rags to riches and back again in some of the most outlandish places on earth.
Vivid encounters with the designer yuppies of New York and California are followed by a photographic commission which brings him face to face with a horrific massacre of Kurdish refugees in Turkey – and a narrow escape from death. Returning to Kabul after the Soviet withdrawal from Afghanistan, he finds the city under rocket attack by his old friends the mujahedeen, and sees for himself the pointless destruction and terror of the forgotten civil war. He attends the Ayatollah Khomeini’s funeral in Tehran, amidst scenes of mass hysteria: goes in search of the Tuareg in Libya; and mingles with would-be ‘wetback’ immigrants from Tijuana – some of whom literally dig their way into the United States. Finally, he returns once more to Afghanistan – and to the abandoned children in Marastoon mental asylum, Kabul, whom he helps to find a new home.

This books is available as a print-on-demand product only.

Born in 1958 of an American father and an English mother, Nick Danziger went to school in Switzerland, then to Chelsea Art School, later becoming a visiting lecturer at art schools and universities and holding one-man exhibitions of his work in London and New York. In 1982 he was awarded a Winston Churchill Memorial Trust Fellowship to follow ancient trade-routes in Iran, Afghanistan, Pakistan and China. Out of the experience came his first book, Danziger’s Travels, which became an immediate bestseller.

Nick Danziger ‘s documentary video film, War, Lives and Videotape’ (based on the children abandoned in Marastoon mental asylum in Kabul), shown as part of the BBC’s Video Diaries series in 1991, won the Prix Italia for best television documentary, against competition from thirty-two countries.

In 1992 he published his second book, Danziger’s Adventures: from Miami to Kabul, ‘an astonishing record of a man who is rarely at rest…Danziger seeks out death and danger the way other young men seek out sex’ (Frank McLynne, Spectator). He was the 1994-95 Fellow in Photography at the National Museum of Photography, Film and Television in Bradford and the Bradford and Ilkley Community College. His photographs have appeared in many newspapers and magazines worldwide, and formed the basis of the recent Channel 4 series Postcards from the Edge, praised by Lynne Truss in The Times as ‘quite superb’ and by the Independent as ‘remarkable’ and ‘outstanding’. Danziger’s second series for Channel 4, The Fight for Hearts and Minds, was nominated for the Grierson Award, and in 1996 he was also nominated for the Journalist of the Year by the Royal Television Society.