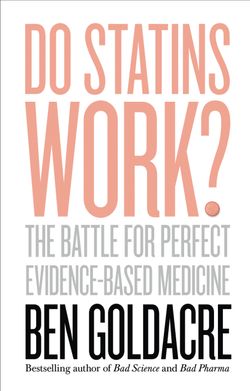 A campaigning handbook, a thrilling work of popular science, and a call to arms for doctors, researchers and patients from Britain’s finest writer on the science behind medicine.

Statins are the single most commonly prescribed class of drugs in the whole of the developed world. They’re taken by over 100 million people, with millions more patients being offered them every year.

We know that statins do some good. But we don’t know how big the benefits are. We don’t know which is the best. We don’t how common the side effects are. We don’t give clear information to patients, so they are deprived of their right to make informed decisions about the trade-off between benefits, inconvenience, and risk. All this can be fixed, with a few simple changes that weld big data onto the heart and art of medicine.

Drawing on his own research, Ben Goldacre gives patients the tools they need to make their own decisions. Along the way he explores industry misdeeds; the “nocebo” effect, the evil twin of the placebo effect, where side effects are caused by the power of fear alone; and the differences in patients’ desire for treatment, and doctors’ failures to empathise with these. With his characteristic wit and energy, Goldacre exposes the flaws in modern medicine, and the future it deserves.

Ben Goldacre is a doctor, writer, broadcaster and academic who specialises in unpicking dodgy scientific claims from drug companies, newspapers, government reports, PR people and quacks. His first book, Bad Science, reached Number One in the non-fiction charts, sold over 400,000 copies in the UK alone, and has been translated into 25 languages.