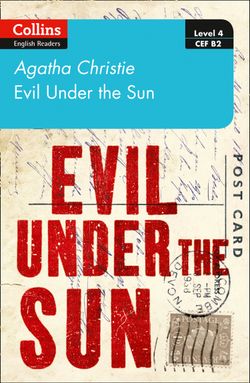 Collins brings the Queen of Crime, Agatha Christie, to English language learners.
Agatha Christie is the most widely published author of all time and in any language. Now Collins has
adapted her famous detective novels for English language learners. These readers have been
carefully adapted using the Collins COBUILD grading scheme to ensure that the language is at the
correct level for an intermediate learner. This book is Level 4 in the Collins ELT Readers series. Level
4 is equivalent to CEF level B2 with a word count of 20,000 – 26,000 words.

Each book includes:
• Full reading of the adapted version available for free online
• Helpful notes on characters
• Cultural and historical notes relevant to the plot
• A glossary of the more difficult words

Hercule Poirot is enjoying a relaxing holiday when a glamorous actress arrives to join their group – then just two days later she is found murdered on a quiet, shaded beach. In his search for her murderer, Poirot quickly learns that beautiful Arlena Stuart was popular with men but mistrusted by women – he believes this murder was planned.
It will take Poirot’s mind to uncover the evil that happened on the beach that day.

Agatha Christie is known throughout the world as the Queen of Crime. Her books have sold over a billion copies in English with another billion in over 70 foreign languages. She is the most widely published author of all time and in any language, outsold only by the Bible and Shakespeare. She is the author of 80 crime novels and short story collections, 20 plays, and six novels written under the name of Mary Westmacott.