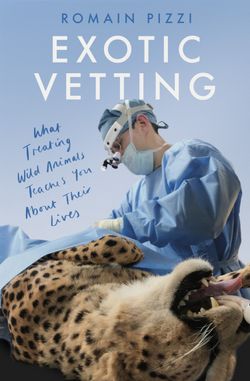 Anaesthetising a fish, x-raying a frog and hospitalising a walrus are all in a day’s work for the world’s wildest veterinarian.

Travelling from the rainforests of Sierra Leone to the jungles of Borneo, Romain Pizzi has caught, anaesthetised, diagnosed, operated on, medicated, and then released some of the world’s most endangered wild animals.

From disease testing Polynesian snails to keyhole surgery in Sumatran orangutans; from endoscopy in sharks to ultrasound on a chimpanzee. Sometimes this is high tech work, such as the first robotic surgery in a tiger, or giant panda cloning attempts. Sometimes the situations are more primitive, from anaesthetising a bear with a bicycle pump, old plumbing tubes and a plank, to operating on a vulture using an old metal spoon.

In Exotic Vetting, Romain recalls his many interesting patients, while taking readers on a tour of the challenges of treating the world’s amazing spectrum of wild animal species.

Dr Romain Pizzi BVSc MSc Phd DZooMed DipECZM MACVS(Surg) FRES FRGS FRSB FRCVS, is a Royal College of Veterinary Surgeons Recognised Specialist in Zoo & Wildlife Medicine, and the world's leading expert in wildlife surgery. He has travelled the globe pioneering many world-first operations in endangered wild animals.Pizzi was born and grew up in South Africa, where he qualified as a veterinary surgeon. He is an honorary professor at the University of Nottingham in zoo and wildlife medicine, and has taught and mentored wildlife veterinarians from around the globe. He has worked with conservation charities, wildlife rescue and rehabilitation centres, and zoos across the world. His work has featured on numerous TV documentaries on the BBC, Animal Planet, National Geographic, CNN and other international media.He lives in Scotland, 10 minutes walk from the ruins of Rosslyn castle, with his vet cardiologist wife and their two young children.