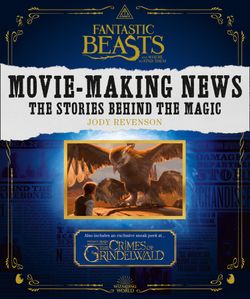 Inspired by the very newspapers seen in the Fantastic Beasts films, and produced on newsprint paper to mimic their appearance, Movie-Making News reveals previously untold behind-the-scenes stories from the first film and offers a sneak-peek at what’s to come in the exciting next instalment.

Bursting with scoops, exclusives and candid insights from the actors and filmmakers that it wasn’t possible to reveal until now, Movie-Making News celebrates Fantastic Beasts and Where to Find Them with features and snippets on the characters, beasts, costumes, special effects, plus a host of filmmaking facts to tantalise readers.

Written in a breezy, accessible style, and designed to mimic a real newspaper, it will also include a colour ‘Late Edition’ that offers early photos and insight into what the future holds for Newt, Jacob, Tina & Queenie in Fantastic Beasts: The Crimes of Grindelwald.

Jody Revenson has written extensively about the Harry Potter films, with her most recent books being J.K. Rowling's Wizarding World: Movie Magic: Volume One and Harry Potter: The Artifact Vault. In her first foray into the wizarding world, she edited and contributed to the New York Times bestsellers Harry Potter: Film Wizardry and Harry Potter: Page to Screen.