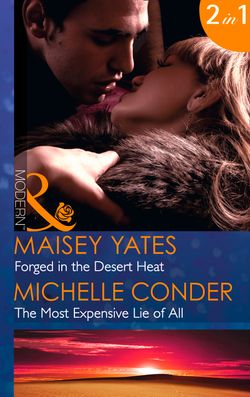 Forged in the Desert Heat

A woman who could start a war

Returning to the throne of Al Sabah, Zafar Nejem’s first act is to rescue American heiress Analise Christensen from her desert kidnappers.

Engaged to the ruler of a neighbouring kingdom, Ana’s discovery must be concealed until Zafar can explain her presence or else he risks war. But as the sun rises over the sand dunes so does the forbidden heat burning between them, threatening everything…

The Most Expensive Lie of All

Winning at all costs?

Cruz Rodriguez swapped the polo field for the boardroom, where his killer instincts have made him phenomenally wealthy. But there’s a hitch in his latest deal – in the sultry form of Aspen Carmichael.

When the darkly handsome Cruz reappears with a multi-million-dollar investment offer Aspen’s torn. She still craves his touch, but beneath his glittering eyes lies a deception that could prove more costly than ever!