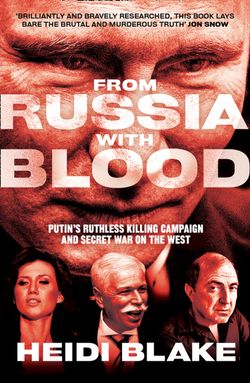 ‘A real life thriller, packed with characters that even John le Carré couldn’t dream of. If this doesn’t scare you, then you’re not paying attention.’ Oliver Bullough

They thought they would be safe in Britain. They were wrong.

‘A spellbinding and heart-in-your-throat true story of Russian money and serial killing … In addition to being an unputdownable story, her shocking exposé will hopefully change the way the British authorities act ’ Bill Browder, author of Red Notice

‘Gripping … When Putin opponents start dropping dead from poisonings, suspicious accidents and surprise heart attacks,the chronology is as damning as it is alarming’ New York Times

Exposing one of the most terrifying stories of our time, Heidi Blake investigates a string of suspicious deaths on British and American soil to build a shocking picture.

Russia systematically assassinates those who dare to flee its grasp – as well as the British citizens who get in the way. Meanwhile, the British authorities turn a blind eye, every investigation curtailed in favour of courting the Kremlin.

Based on the revelatory discovery of over a dozen ignored murders, this is a chilling, page-turning read.

Heidi Blake is an investigative journalist at BuzzFeed News. She has won more than twenty national and international media awards, and her team’s investigation into Russian assassinations in the West was named a Pulitzer finalist in 2018. Blake was previously assistant editor of the Sunday Times, where her work on corruption at FIFA helped bring down FIFA president Sepp Blatter, and she is the coauthor of The Ugly Game: The Corruption of FIFA and the Qatari Plot to Buy the World Cup.