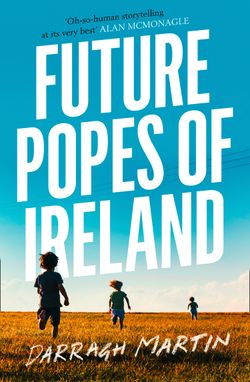 A big-hearted, funny and sad novel about the messiness of love, family and belief

LONGLISTED FOR THE DESMOND ELLIOTT PRIZE

SHORTLISTED FOR IRISH NOVEL OF THE YEAR AWARD

‘Dazzling. A novel of epic ambition yet intimate in scope’ Literary Review

In 1979 Bridget Doyle has one goal left in life: for her family to produce the very first Irish pope. Fired up by John Paul II’s appearance in Phoenix Park, she sprinkles Papal-blessed holy water on the marital bed of her son and daughter-in-law, and leaves them to get on with things. But nine months later her daughter-in-law dies in childbirth and Granny Doyle is left bringing up four grandchildren: five-year-old Peg, and baby triplets Damien, Rosie and John Paul.

Thirty years later, it seems unlikely any of Granny Doyle’s grandchildren are going to fulfil her hopes. Damien is trying to work up the courage to tell her that he’s gay. Rosie is a dreamy blue-haired rebel who wants to save the planet and has little time for popes. And irrepressible John Paul is a chancer and a charmer and the undisputed apple of his Granny’s eye – but he’s not exactly what you’d call Pontiff material.

None of the triplets have much contact with their big sister Peg, who lives over 3,000 miles away in New York City, and has been a forbidden topic of conversation ever since she ran away from home as a teenager. But that’s about to change..

Originally from Dublin, Darragh Martin now lives in London. He has written several plays and a children’s novel, The Keeper, which was shortlisted for Children’s Book of the Year at the Irish Book Awards in 2013. Future Popes of Ireland is his first adult novel.