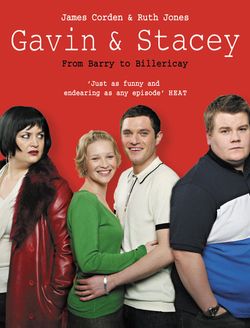 Gavin & Stacey (plus friends) take you on a tour of their home towns, showing you the world of their hit BBC comedy series as you’ve never seen it before.

‘Oh, the guilt. She (Nessa) stuck things in…oh…look can you ask Stacey coz’ if it’s a Welsh thing I don’t have to see a doctor.’ Smithy

If only it was just the two of them.

Gavin is an ordinary boy from Essex. Stacey is an ordinary girl from South Wales. The result is a double BAFTA award winning hit BBC comedy that has become the biggest show since Phoenix Nights and Little Britain.

For for the first time, Gavin & Stacey and friends take us on their journey from Barry to Billericay.

Fully illustrated with stills and photographs from the show, Gavin and Stacey: From Barry to Billericay will feature brand new material written by the stars and co-writers of the series Ruth Jones and James Corden.