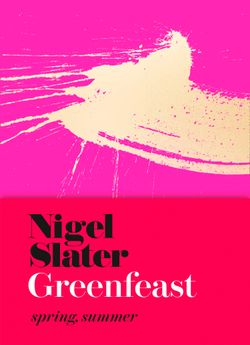 The first in a pair of fast, season-led vegetable books from beloved author and cook Nigel Slater.

‘Much of my weekday eating contains neither meat nor fish … It is simply the way my eating has grown to be over the last few years.’

Greenfeast: spring, summer is a vibrant and joyous collection of the food Nigel eats at the end of the day. Over 110 simply beautiful spring and summer recipes, each with suggested variations, that can mostly be on the table in 30 minutes. This is perfect for people who want to eat less meat, but don’t want to compromise on flavour and ease of cooking.

From roast spring vegetables with peanut sauce to rice, broad beans and asparagus, or peaches with blackberries and ice cream, this green follow-up to the bestselling Eat is for everyone who wants daily inspiration for quick plant-based suppers. Greenfeast: autumn, winter will follow in October 2019.

Nigel Slater is the author of a collection of best-selling books and presenter of BBC 1's Eating Together, Simple Cooking and Dish of the Day. He has been food columnist for The Observer for over twenty years. His books include the classics Appetite and The Kitchen Diaries I, II and III and the critically acclaimed two-volume Tender. His award-winning memoir Toast: The Story of a Boy's Hunger won six major awards and was made into a BBC film starring Helena Bonham Carter and Freddie Highmore. Nigel’s writing has won the National Book Awards, the Glenfiddich Trophy, the André Simon Memorial Prize, the Fortnum & Mason Food Book Award and the British Biography of the Year. He was the winner of a Guild of Food Writers' Award for his BBC 1 series Simple Suppers.