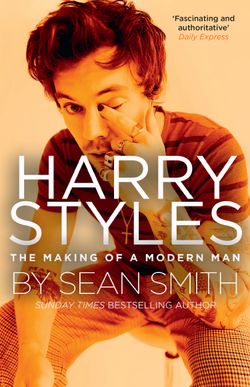 ‘Fascinating and authoritative’ The Daily Express

Harry Styles has grown up. The One Direction boy band member so loved by millions has become a truly global superstar – and he’s done it without shouting from the rooftops or displaying a mammoth ego.

In this captivating biography for fans from day one as well as a whole new generation, Sean Smith chronicles the development of a thoroughly modern man with boundless charisma who represents a better world devoid of prejudice.

Harry’s life changed forever when his mum Anne filled in a form requesting an audition to the X Factor. He left his home in rural Cheshire as a sixteen-year-old and never went back – setting out on a path to become a genuine icon of the age.

Harry Styles: the Making of a Modern Man follows his journey, painting a picture of a man who at times remains an enigma while embracing the world he cares about – his family, his friends and lovers, his music, acting and, of course, the world of fashion.

Harry is the only British male artist to have his first two albums debut at number one in the US; his movie career is flourishing with starring roles in Don’t Worry Darling and My Policeman and he is the first man to appear solo on the cover of Vogue. A champion of gender fluid fashion he has proved himself to be an inspiring role model in a world where toxic masculinity has no place.

In troubling and uncertain times, Harry Styles lives to his own mantra that would benefit us all – ‘Treat People with Kindness.’

Sean Smith is the UK's leading celebrity biographer and the author of the number one bestseller Cheryl, as well as Sunday Times bestselling books about Tom Jones, Robbie WIlliams and Kate Middleton.His books about the most famous people of our times have been translated throughout the world. His subjects include Adele, George Michael, Ed Sheeran, Kim Kardashian, the Spice Girls, Gary Barlow, Kylie Minogue, Justin Timberlake, Britney Spears, and Jennifer Aniston. The film Magic Beyond Words: The J. K. Rowling Story was based on his biography of the Harry Potter author.Described by the Independent as a 'fearless chronicler', he specialises in meticulous research, going 'on the road' to find the real person behind the star image.www.seansmithceleb.com