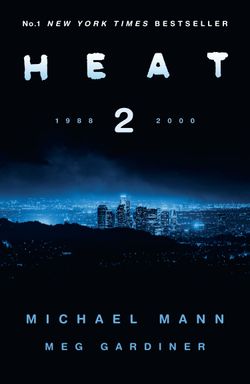 Michael Mann, Oscar-nominated filmmaker and writer-director of Heat and Miami Vice, teams up with Edgar Award-winning author Meg Gardiner to deliver Mann’s first crime novel – an explosive return to the world and characters of his classic film Heat – an all-new story that illuminates what happened before and after the iconic film.

This new story leads up to the events of the film and then moves beyond it, featuring new characters on both sides of the law, new high-line heists, and breathtakingly cinematic action sequences. Ranging from the streets of L.A. to the inner sancta of rival Taiwanese crime syndicates in Paraguay to a massive drug cartel money-laundering operation just over the border in Mexico, HEAT 2 illuminates the dangerous workings of international crime organizations and the agents who pursue them as it provides a full-blooded portrait of the men and women who inhabit both worlds.

Operatic in scope, HEAT 2 is engrossing, moving, and tragic – a masterpiece of crime fiction from one of the most innovative and influential filmmakers in American cinema.

Michael Mann is a world-renowned director, screenwriter, producer, and one of the most innovative and influential filmmakers in American cinema. Mann has written and directed award-winning television movies and series (including Miami Vice and Crime Story) and feature films including Manhunter, The Last of the Mohicans, Heat, and Miami Vice. He has produced numerous feature films, including Academy Award-winner The Aviator and directed several commercially successful, critically acclaimed projects including the feature film Collateral and the pilot for the HBO series Luck. Mann has won many prestigious awards, including a BAFTA for Best Film (The Aviator), a Golden Globe for Best Picture/Drama (The Aviator), and an NBR Award for Best Director (Collateral). Mann lives in Los Angeles.Meg Gardiner is the author of sixteen acclaimed, award-winning novels. Her thrillers have been bestsellers in the U.S. and internationally and have been translated into more than twenty languages.