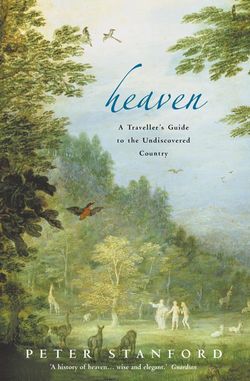 A stimulating inquiry into one of the great religious mysteries – and what theologians, artists, writers, psychologists, priests, historians and people from all religions and walks of life have thought of heaven, where many of us still hope to go one day.

The author writes: ‘While images of hell are firmly fixed in the human psyche, no parallel standard vision exists for heaven either within the Christian Church or more widely in the world’s various religious traditions…it has somehow been judged indecent or presumptuous to contemplate the better end of the post-mortem destination market. This book will break that taboo.’

Heaven’s mysteriousness has leant it a discreet but powerful allure. There are two basic views: first, the afterlife will involve a vaguely defined spiritual peace – eternal solitude with God alone; the second allows for some overlap between heaven and earth, and hence relationships outside the central bond with God. Or is heaven religion’s biggest con-trick but one that is impossible to debunk?

Peter Stanford’s previous books include biographies of Lord Longford, Cardinal Basil Hume, Bronwen Astor and most recently the Devil. He has also written an investigation of the Pope Joan legend and a polemical book, Catholics and Sex, which accompanied a Channel 4 television series. He contributes regularly to the Guardian and Sunday Telegraph and New Statesman. A regular broadcaster, he is also chairman of the national disability charity ASPIRE.