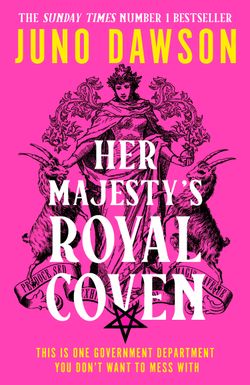 The first in a supernatural new series from the author of Wonderland, Her Majesty’s Royal Coven follows a top secret government department of witches and the deadly threat to the nation that they must confront.

Hidden among us is a secret coven of witches. They are Her Majesty’s Royal Coven. They protect crown and country from magical forces and otherworldly evil. But their greatest enemy will come from within.

There are whisperings of a prophecy that will bring the coven to its knees, and five best friends are about to be caught at the centre. Life as a modern witch was never simple … but now it’s about to get apocalyptic.

Prepare to be bewitched by Juno Dawson’s first adult series. A story of ancient prophecies and modern dating, of sacred sisterhood and demonic frenemies.

Juno Dawson is a bestselling novelist, screenwriter, journalist, and a columnist for Attitude Magazine.Juno’s books include the global bestsellers, THIS BOOK IS GAY and CLEAN. She won the 2020 YA Book Prize for MEAT MARKET. She also writes for television and has multiple shows in development both in the UK and US. An occasional actress and model, Juno appeared in the BBC’s I MAY DESTROY YOU (2020) and HOLBY CITY (2021) and was the face of Jecca Cosmetics Play Pots campaign.Her journalism has appeared in Glamour, The Pool, Dazed and the Guardian. She has appeared on Pointless Celebrities, BBC Women’s Hour, Front Row, ITV News, Channel 5 News, This Morning and Newsnight.Juno lives in Brighton. She is a part of the queer cabaret collective known as CLUB SILENCIO. In 2014, Juno became a School Role Model for the charity STONEWALL.