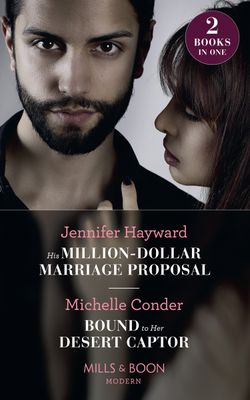 A business proposition—sealed with a ring!

Lazzero needs a fake fiancée to win a business deal. He offers to absolve Chiara’s father’s bankruptcy, if she wears his ring! But with their explosive attraction, soon Lazzero wants Chiara as his—for good!

Bound to Her Desert Captor
Seduced by the sheikh’s touch!

Certain that Regan has information on his sister’s disappearance, Sheikh Jaeger steals her away to his palace. But when beautiful, defiant Regan accidentally causes a media storm, to resolve it Jaeger must marry Regan!

Award-winning author JENNIFER HAYWARD emerged on the publishing scene as the winner of Harlequin's So You Think You Can Write global writing contest. The recpient of Romantic Times Magazine's Reviewer's Choice Award for Best Harlequin Presents of 2014 Jennifer's careers in journalism and PR, including years of working alongside powerful, charismatic CEOs and traveling the world, have provided perfect fodder for the fast-paced, sexy stories she likes to write.