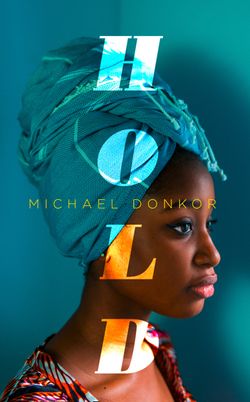 Moving between Ghana and London, Hold is an intimate, powerful coming-of-age novel. It’s a story of friendship and family, shame and forgiveness; of learning what we should cling to, and when we need to let go.

‘You have to imagine. That’s how I told myself.’
‘Imagine what?’
‘Imagine that you are the kind of girl that can cope with it, even if you are not.’

Belinda knows how to follow the rules. She has learnt the right way to polish water glasses, to wash and fold a hundred handkerchiefs, and to keep a tight lid on memories of the village she left behind when she came to Kumasi to be a housegirl.

Mary is still learning the rules. Eleven years old and irrepressible, the young housegirl-in-training is the little sister Belinda never had.

Amma has had enough of the rules. A straight-A pupil at her exclusive South-London school, she has always been the pride of her Ghanaian parents. Until now. Watching their once-confident teenager grow sullen and wayward, they decide that sensible Belinda might be just the shining example Amma needs.

So Belinda is summoned from Ghana to London, to befriend a troubled girl who shows no desire for her friendship. She encounters a city as bewildering as it is exciting, and as she tries to impose order on her unsettling new world, Belinda’s phonecalls back home to Mary become a lifeline.

As the Brixton summer turns to autumn, Belinda and Amma are surprised to discover the beginnings of an unexpected kinship. But when the cracks in their defences open up, the secrets they have both been holding tight to threaten to seep out…

Michael Donkor was born in London, to Ghanaian parents. He studied English at Wadham College, Oxford, undertook a Masters in Creative Writing at Royal Holloway and now teaches English Literature to secondary school students. Many of the issues in this novel are close to his heart, and his writing won him a place on the Writers’ Centre Norwich Inspires Scheme in 2014, where he received a year’s mentoring from Daniel Hahn.