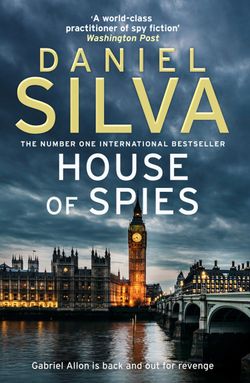 Gabriel Allon is back and out for revenge

Four months after the deadliest attack on the American homeland since 9/11, terrorists leave a trail of carnage through London’s West End. The attack is a brilliant feat of planning and secrecy, except for a single thread.

The thread leads legendary spy, art restorer, and assassin Gabriel Allon and his team to the south of France and the doorstep of Jean-Luc Martel and Olivia Watson. A beautiful former fashion model, Olivia pretends not to know that the true source of Martel’s enormous wealth is drugs. And Martel, likewise, turns a blind eye to the fact he is doing business with a man whose objective is the very destruction of the West. Together, under Gabriel’s skilled hand, they will become an unlikely pair of heroes in the global war on terrorism.

Daniel Silva is the award-winning, No.1 New York Times bestselling author of twenty novels, including The Unlikely Spy, The Confessor, A Death in Vienna, The Messenger, Moscow Rules, The Rembrandt Affair, The English Girl and The Black Widow. His books are published in more than thirty countries and are best sellers around the world. He lives in Florida with his wife, CNN special correspondent Jamie Gangel, and their two children, Lily and Nicholas.