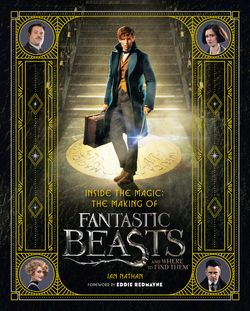 Return to the wizarding world and discover how director David Yates and producer David Heyman brought J.K. Rowling’s all-new adventure, the Academy Award®-nominated Fantastic Beasts and Where to Find Them to the big screen.

Discover how director David Yates, producer David Heyman and a talented team of No-Majs brought J.K. Rowling’s Fantastic Beasts and Where to Find Them to the screen.

Meet Newt Scamander, Magizoologist, and explore such wonders as MACUSA, United States counterpart to the Ministry of Magic, the magical secrets of Newt’s case, and the fantastic beasts themselves.

Let Inside the Magic: The Making of Fantastic Beasts and Where to Find Them take you on a filmmaking journey into 1920s New York. Learn about the film’s costumes, wands, and special effects, and find out which character’s wand is made of shell, which famous wizard is Newt’s friend, which witch is a Legilimens, and which beast ends up at the zoo!

Packed with exciting photos and revealing, behind-the-scenes detail from J.K. Rowling, David Yates, production designer Stuart Craig, Eddie Redmayne and other cast members, this is the definitive companion to the film, and perfect introduction to Fantastic Beasts and Where to Find Them.

Ian Nathan is a former editor and executive editor of Empire Magazine, where he remains a contributing editor. One of the UK’s best known film writers, he is the author of titles including Alien Vault and Terminator Vault, and has produced and featured in various documentaries. He lives and works in London.