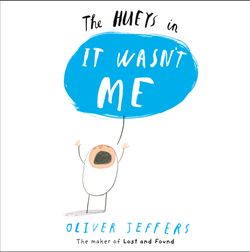 Meet the Hueys – a fabulously quirky group of characters from international bestselling, award-winning author/illustrator, Oliver Jeffers, creator of How to Catch a Star and Lost and Found.

The sequel to The Hueys – The New Jumper, a New York Times Best Illustrated Book of the Year, 2012

A fight has broken out amongst The Hueys. “It was not me! It was him!” But no one can remember what they’re fighting about. If only they could find an interesting distraction…