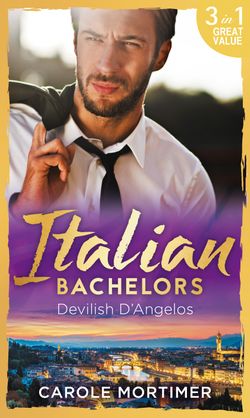 Bryn Jones has never forgiven international tycoon Gabriel for sending her father to prison, destroying her family and breaking her heart. But the artist has forged herself a new identity, away from the scandal…until Gabriel asks for a deal that will be mutually beneficial and pleasurable!

Nina Palitov’s act of defiance against oppressive control was to spend one exquisite night with a man of her choice. But Rafe D’Angelo relishes a challenge and his pursuit of her provokes a passion she’s never expected. but with her family’s deepest secret at risk it’s essential she doesn’t become Rafe’s latest prize!

Michael D’Angelo might be the driving force behind the successful Archangel galleries, but it doesn’t mean he’s perfect…he lost his halo years ago! Yet when a delectable woman shows up in Paris, claiming he’s the father to twins, it’s one mistake Michael knows is not his.

Carole Mortimer was born in England, the youngest of three children. She began writing in 1978, and has now written over one hundred and seventy books for Harlequin Mills and Boon®. Carole has six sons, Matthew, Joshua, Timothy, Michael, David and Peter. She says, ‘I’m happily married to Peter senior; we’re best friends as well as lovers, which is probably the best recipe for a successful relationship. We live in a lovely part of England.’