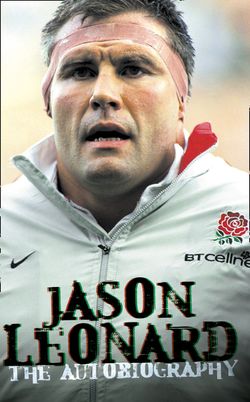 Leonard’s story starts as rugby started – in the amateur days, when the Cockney Carpenter began playing for Barking and Saracens in the days before multi-million pound business owners and sponsorship deals. His big break came when he was invited to join the England squad for their tour to Argentina in 1990 and has been capped 100 times.

It was a tour that precipitated one of the greatest periods in the history of the British game, and Leonard provides a compelling insight into life behind the international scenes with England and the Lions, as well as the domestic game through his time at Saracens and Harlequins.

Once told that he would never walk again after undergoing life-saving surgery on his neck, Leonard describes the torment he went through during this period – both physical and financial – and how he fought against all the odds to re-establish himself on the international stage. With 100 Test caps won to date, and a career in rugby union spanning two decades, there is no more experienced player in the modern game.

Leonard has plenty to tell about the people he has met during his career – Rob Andrew, Will Carling, Lawrence Dallaglio, Brian Moore, Dick Best and Clive Woodward all feature – and with nicknames like ‘The Fun Bus’ and ‘The Scourge of the Barking Barmaids’ the stories are as colourful and controversial as the man himself.

All is revealed in this fascinating portrait of an English rugby legend who also reflects upon England’s 2002 Six Nations campaign, his hopes for his international future and a tough year for Quins.

Jason Leonard was born in Barking in Aug 1968. He started playing rugby at the age of 10 and graduated via Saracens and England B, before becoming an international 1990. He is the current Harlequins captain.Alison Kervin is Rugby Editor of The Times. She has also edited of Rugby World and been PR manager for the England rugby team (1991-1995) She has won a number of awards, including the Sports Council Feature Writer of the Year in 1995.