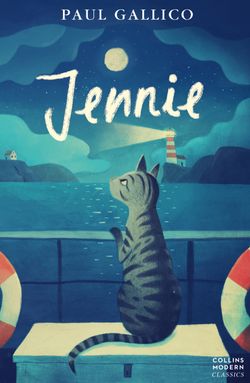 What is it like to be a cat? Find out in this classic animal story from the renowned writer Paul Gallico.

Peter Brown longs for a pet cat. One day, he is following a stray cat through the streets when he is knocked down and seriously hurt. On waking, he is astonished to find that he has turned into a cat… The world is a dangerous place for him, but luckily he is rescued and befriended by Jennie, a kindly stray tabby who has been abandoned by her owners. Adventures wait around every corner for the two new friends, as Jennie teaches Peter all about life as a cat.

Humorous and touching, and packed with acutely observed feline behaviour, this is a beloved classic that’s essential for any cat-lover.

PAUL GALLICO (1897–1976) was born in New York City and studied at Columbia University. After serving in the First World War he became a journalist with the New York Daily News where he enjoyed particular acclaim for his sports writing. In 1936 Paul Gallico moved to Salcombe in South Devon where he became a full time writer, living in a house on a hill with his Great Dane and twenty-three cats. He became a notable war correspondent during the Second World War. Among Paul Gallico’s best known books are The Snow Goose (1941), a classic story of Dunkirk, and The Poseidon Adventure (1969), which was made into a very successful film. His magical stories about animals, particularly cats, are enduring favourites. These include Jennie (1950) and Thomasina (1957).