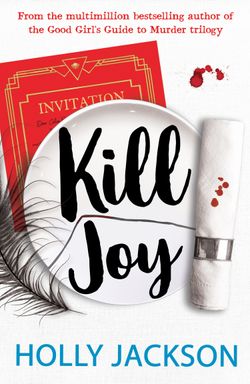 Find out where it all began for Pip in this prequel novella to the bestselling, award-winning A Good Girl’s Guide to Murder,Good Girl, Bad Blood and As Good As Dead. Previously published in 2021 as a World Book Day title.

THE GOOD GIRL’S GUIDE TO MURDER IS A TIKTOK SENSATION. THE WINNER OF THE BRITISH BOOK AWARDS’ CHILDREN’S BOOK OF THE YEAR 2020, A NEW YORK TIMES BESTSELLER AND SHORTLISTED FOR THE WATERSTONES CHILDREN’S BOOK PRIZE 2020

Pippa Fitz-Amobi is not in the mood for her friend’s murder mystery party. Especially one that involves 1920’s fancy dress and pretending that their town, Little Kilton, is an island called Joy. But when the game begins, Pip finds herself drawn into the make-believe world of intrigue, deception and murder.

But as Pip plays detective, teasing out the identity of the killer clue-by-clue, the murder of the fictional Reginald Remy isn’t the only case on her mind …

Holly Jackson is the bestselling author of the A Good Girl's Guide to Murder trilogy. She lives in London and aside from reading and writing, she enjoys playing video games and watching true crime documentaries so she can pretend to be a detective.You can follow Holly @HoJay92