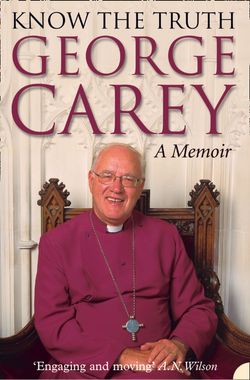 ‘Know the Truth’ tells George Carey’s story from growing up in Dagenham to his experiences in the RAF in the early 1950s, of how he was to become Bishop of Bath and Wells and thereafter attained the position of Archbishop of Canterbury.

Utterly sincere and told with warmth and compassion, ‘Know the Truth’ shares George Carey’s story of marriage, family and friendship as well as addressing the wider political aspects of his time at Lambeth.

George Carey was born in 1935 in the East End of London, the son of a porter. After failing his 11-plus he left school at 15 and began working at the London Electricity Board as an office boy and served with the British armed forces in Iraq in the 1950s. By the time he was 20, he had decided he wanted to be ordained. After positions as parish priest and Bishop of Bath and Wells, he became the 103rd Archbishop of Canterbury and served in office from 1991-2003.