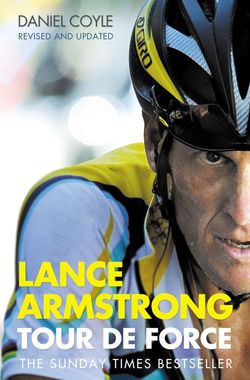 Lance Armstrong rewrote the record books in 2005 when he won the Tour de France for an unprecedented seventh time. Daniel Coyle followed his progress, throughout that season, examining what made him push himself to the limit of his endurance, for his bestselling book Tour de Force now fully updated with his celebrated return to the Tour in 2009.

The world’s most challenging athletic endeavour is also one of the biggest and most popular annual sports events in the world. The 2005 race witnessed Texan Lance Armstrong clinch his seventh Tour de France victory – something that no other rider has achieved in the event’s 100-year history.

This book looks into the unprecedented build up to the Tour, focusing on Armstrong’s season and on the physical and mental limits of endurance through which he forced himself. Starting off in February when he made his annual move to Girona in Spain where preparation for the Tour becomes all-consuming, all the details of his hypermasochistic training regime will be unveiled, from sleeping in an altitude tent to the miles of gruelling riding through the pain barrier.

This ‘inside story’ also involves access to Armstrong’s US Postal Service Team and key rivals in the battle for the Yellow Jersey – among them German Jan Ulrich, American Tyler Hamilton, and Spaniard Joseba Beloki.

Above all, Armstrong’s motivational strengths and burning desire to achieve are the focus of a book that celebrates a unique sporting phenomenon – a fascinating look at history in the making and the colourful world of professional road cycling.

Daniel Coyle was born in Nome, Alaska. A former Editor of Outside magazine in the States, he is one of the most respected magazine journalists in his native country, having contributed feature articles to the likes of Men’s Journal, Esquire and Sport’s Illustrated. His writings have ranged from an interview with cyclist Tyler Hamilton to a profile of the captain of the Exxon Valdez, for which he was shortlisted for the National Magazines Award for Feature Writer of the Year in 1990.