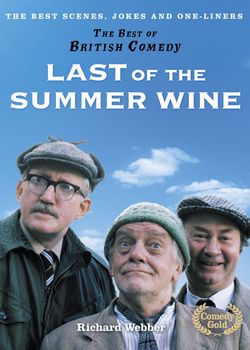 The best jokes, gags and scenes from a true British comedy classic.

‘Do you reckon I’m in love with Mrs. Batty, or is it just sex?’ Compo

Compo: I thought you’d be open.
Sid: Well that’s a natural assumption if you ignore the drawn blinds and the forty foot sign that says closed.

Set and filmed in and around Holmfirth, West Yorkshire, Last of the Summer Wine follows the adventures of three quirky pensioners and their equally unusual neighbours. A true British classic that appeals to all generations, it is our nation’s longest running comedy programme. The line-up of the comedy trio has changed numerous times over the years, but the calibre of the family-friendly humour Roy Clarke creates has remained the same, and it’s as funny and eccentric now as it was in the first episodes he wrote over 25 years ago.

Including the pilot, broadcast ten months before the first series, 29 series, made up of 279 episodes, have been screened to date, with the 30th series set to air this autumn. The sitcom has consistently been a favourite in the ratings, with viewing figures peaking at 18.8 million in the mid-eighties.

Famous fans include Prince Charles, the Queen Mother and the Queen, who said it was her favourite TV show.

The Best of British Comedy – Last of the Summer Wine includes:

• The History: an overview of how Last of the Summer Wine was born and developed
• Gags and Catchphrases: a collection of classic quotes
• Did You Know?: snippets of info about the show, cast, etc.
• Favourite scenes: the most memorable scenes in full
• A LOSW quiz

‘If God’s omnipotent, what could he possibly want with my old woman?’ Clegg

Compo: Your old lady’s dog is crapping all over the pavement.
Blamire: That’s funny. He usually sews it up in little bags and sends it by post.

Richard Webber writes regulary about TV in his job as a journalist and writer. He contributes to a host of newspapers and magazines, including TV Quick, Daily Express, Sunday Express and the Sunday Telegraph and is the author of over a dozen books celebrating classic comedy.