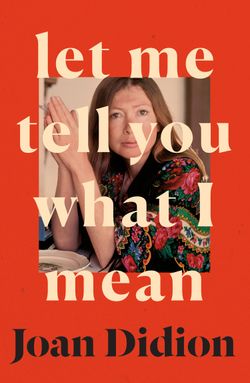 From one of our most iconic and influential writers: twelve pieces never before collected that offer an illuminating glimpse into the mind and process of this legendary figure.

Mostly drawn from the earliest part of her astonishing five-decade career, Didion writes about a Gamblers Anonymous meeting, a visit to William Randolph Hearst’s castle at San Simeon, a reunion of WWII veterans in Las Vegas, and about topics ranging from Nancy Reagan to Robert Mapplethorpe, Martha Stewart and Ernest Hemingway.

With an Introduction by Hilton Als, this stunning collection reveals what would become her subjects: the press, politics, California robber barons, women, the act of writing, and her own self-doubt. Each piece is classic Didion: incisive, bemused, and stunningly prescient.

JOAN DIDION is the author of five novels, ten books of nonfiction, and a play. Her book, The Year of Magical Thinking, won the National Book Award in 2005. She lives in New York.HILTON ALS is the author of The Women and White Girls. He is a staff writer for The New Yorker and teaches at Columbia University.