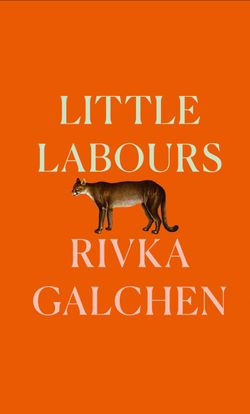 A droll and dazzling compendium of observations, stories, lists, and brief essays about babies.

‘Beguiling … A wunderkabinett of baby-related curios … A peculiar book, and astonishing in its effect.’ Boston Globe

One August day, a baby was born, or as it seemed to Rivka Galchen, a puma moved into her apartment. Her arrival felt supernatural, she seemed to come from another world. And suddenly, the world seemed ludicrously, suspiciously, adverbially sodden with meaning.

But Galchen didn’t want to write about the puma. She had never been interested in babies, or in mothers before. Now everything seemed directly related to them and she specifically wanted to write about other things because it might mean she was really, covertly, learning something about babies, or about being near babies.

The result is Little Labours, a slanted enchanted miscellany. Galchen writes about babies in art (with wrongly shaped head) and babies in literature (rarer than dogs or abortions, often monstrous); about the effort of taking a passport photo for a baby not yet able to hold up her head and the frightening prevalence of orange as today’s chic colour for baby gifts; about Frankenstein as a sort of baby and a baby as a sort of Godzillas. In doing so she opens up an odd and tender world of wonder.

RIVKA GALCHEN is the author of Atmospheric Disturbances and American Innovations. In 2010 she was named by The New Yorker as one of the top twenty American authors under the age of forty. She lives in New York.