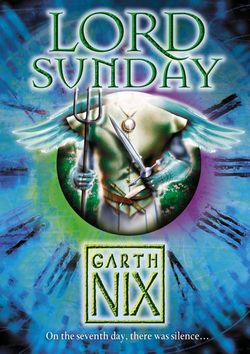 In this seventh and last book of THE KEYS TO THE KINGDOM, the mysteries of the House, the Architect, the Trustees, the Keys and the Will are revealed, and the fate of Arthur, our Earth, and the entire Universe is finally decided.

Arthur has wrested the Sixth Key from Superior Saturday, but has fallen from the Incomparable Gardens; fallen not to the Upper House but to somewhere completely unexpected. Alone in enemy territory, as his mind and body are further transformed by the power of the Keys, Arthur must struggle with himself as much as with his many enemies.

Meanwhile, Arthur’s friend Suzy Blue plots an escape from her prison in Saturday’s tower, as battle rages above and below. Saturday’s elite force is pressing on into the Incomparable Gardens, while her massed sorcerers fight a desperate rear-guard action against the Piper and his Newnith army.

On earth, Leaf has to cope with the aftermath of a nuclear strike. Responsible for all the Sleepers in Friday’s private hospital, she needs all the help she can get, particularly as Leaf herself has become a target for intruders from the House.

And the tide of Nothing continues to rise, destroying everything in its path . . .

Garth Nix was born in 1963 and grew up in Canberra, Australia. After taking his degree in professional writing from the University of Canberra, he worked in a bookshop and then moved to Sydney. There he sank lower into the morass of the publishing industry, steadily devolving from sales rep through publicist until in 1991 he became a senior editor with a major multinational publisher. After a period travelling in Eastern Europe, the Middle East and Asia in 1993, he left publishing to work as a marketing communications consultant . In 1999 he was lured back to the publishing world to become a part-time literary agent. He now lives in Sydney, a five-minute walk from Coogee Beach, with his wife Anna, son Thomas, and lots of books.