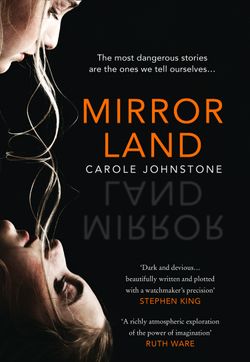 The most dangerous stories are the ones we tell ourselves…

No. 36 Westeryk Road, an imposing flat-stone house on the outskirts of Edinburgh. A house of curving shadows and crumbling grandeur. But it’s what lies under the house that is extraordinary – Mirrorland. A vivid make-believe world that twin sisters Cat and El created as children. A place of escape, but from what?

Now in her thirties, Cat receives the shocking news that her sister has disappeared. Forced to return to Edinburgh, Cat finds herself irresistibly drawn back into Mirrorland. Because El has a plan. She’s left behind a treasure hunt that will unearth long-buried secrets…

A sharply crafted mystery about the power of imagination and the price of freedom, perfect for fans of Erin Kelly and Tana French.

Carole Johnstone’s award-winning short fiction has been reprinted in many annual ‘Best of’ anthologies in the UK and US. She lives in Argyll & Bute, Scotland, with her husband. Mirrorland is her debut novel.