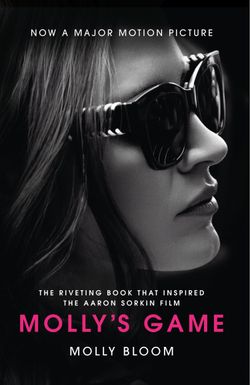 The true story of the 26-year-old woman behind the most exclusive, high-stakes underground poker game in the world

When Molly Bloom was a little girl in a small Colorado town, she dreamed of a life without rules and limits, a life where she didn’t have to measure up to anyone or anything – where she could become whatever she wanted.

She ultimately got more than she ever could have bargained for.

In Molly’s Game, she takes you through her adventures running an exclusive private poker game catering to Hollywood royalty like Leonardo DiCaprio and Ben Affleck, athletes, billionaires, politicians and financial titans. With rich detail, Molly describes a world of glamour, privilege and secrecy in which she made millions, lived the high life and fearlessly took on the Russian and Italian mobs – until she met the
one adversary she could not outsmart: the United
States government.

Molly Bloom grew up in Loveland, Colorado. She attended the University of Colorado at Boulder, majoring in Political Science. Molly was a member of US ski team and was ranked 3rd overall in North America in 1998. For several years Molly organised one of the largest high-stakes poker games in the country. She lives in Los Angeles, CA.