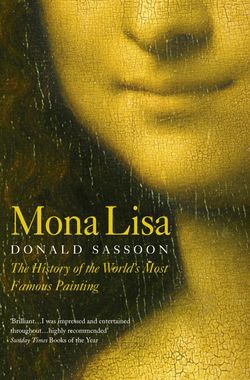 A narrative history of how Leonardo da Vinci’s painting of the Mona Lisa came to be the most famous in the world – and one of the most powerful cultural icons of our time.

What has made the Mona Lisa the most famous picture in the world? Why is it that, of all the 6,000 paintings in the Louvre, it is the only one to be exhibited in a special box, set in concrete and protected by two sheets of bulletproof glass? Why do thousands of visitors throng to see it every day, ignoring the masterpieces which surround it?

For nearly 500 years the painting – and the mysterious smile on the face of the sitter – has been a source of mystery, speculation and reverence. In this groundbreaking new book Donald Sassoon describes not only the Mona Lisa and its history, but its mythology, and the processes which combined to raise it to its current unrivalled level of fame. He examines Leonardo’s innovative techniques; the problems concerning the identity of the sitter; what happened to the painting after it left Italy when Leonardo joined King François I’s court in France; the copies made in the 17th century; its celebration by 19th-century intellectuals; its theft and disappearance early in the 20th century; the surrealists’, other avant-garde artists’ and cartoonists’ uses of it; its appropriation by the advertising industry; and the never-ending flood of new and ‘conclusive’ theories about Mona Lisa’s smile.

Donald Sassoon is Professor of Comparative European History at Queen Mary, University of London. He is author of several books, including Contemporary Italy: Politics, Economy and Society Since 1945 and One Hundred Years of Socialism (Fontana 1997).