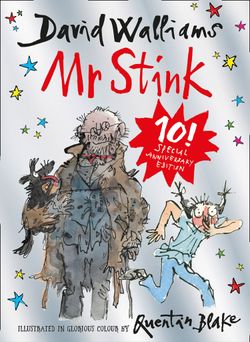 David Walliams’ bestselling book Mr Stink has gone FULL COLOUR in a brand-new anniversary edition. This beautiful hardback gift book is the perfect present for children of any age, and contains an introduction from David Walliams himself. Available for a limited time only!

Mr Stink was the second David Walliams book to be illustrated by the inimitable Quentin Blake, and won unanimous critical acclaim. Mr Stink remains one of his most beloved characters – in a tale that continues to touch the hearts of readers everywhere.