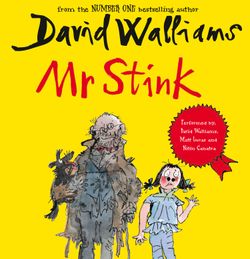 The second original, touching, twisted, and most of all hilarious novel and audiobook for children performed by David Walliams and Matt Lucas. This wonderful story is told by two of Britains best loved comedians and the characters from David’s book spring to life with fantastic voices and characters galore that will make you laugh out loud.

READ BY DAVID WALLIAMS and MATT LUCAS
“Mr Stink stank. He also stunk. And if it was correct English to say he stinked, then he stinked as well…”