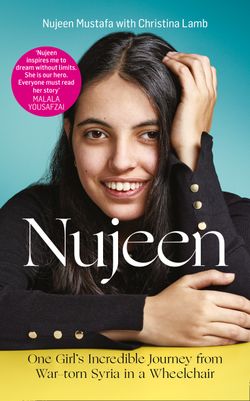 The story that is inspiring the world.

Read about Nujeen who escaped the hell of war in Aleppo and travelled to Europe in a wheelchair.

‘She is our hero. Everyone must read her story. She will inspire you’ MALALA YOUSAFZAI

Nujeen Mustafa has cerebral palsy and cannot walk. This did not stop her braving inconceivable odds to travel in her wheelchair from Syria in search of a new life. Sharing her full story for the first time, Nujeen recounts the details of her childhood and disability, as well as the specifics of her harrowing journey across the Mediterranean to Greece and finally to Germany to seek an education and the medical treatment she needs.

Nujeen’s story has already touched millions and in this book written with Christina Lamb, bestselling co-author of ‘I Am Malala’, she helps to put a human face on a global emergency.
Trapped in a fifth floor apartment in Aleppo and unable to go to school, she taught herself to speak English by watching US television. As civil war between Assad’s forces and ISIS militants broke out around them, Nujeen and her family fled first to her native Kobane, then Turkey before they joined thousands of displaced persons in a journey to Europe and asylum. She wanted to come to Europe, she said, to become an astronaut, to meet the Queen and to learn how to walk.

In her strong, positive voice, Nujeen tells the story of what it is really like to be a refugee, to have grown up in a dictatorship only for your life to be blighted by war; to have left a beloved homeland to become dependent on others. It is the story of our times told through the incredible bravery of one remarkable girl determined to keep smiling.

Born with cerebral palsy, 18-year-old Nujeen Mustafa has spent her life in a wheelchair. She had little formal education in Syria but taught herself English by watching US soap operas. In 2014 her home town of Kobane was at the centre of fierce fighting between Isis militants and US-backed Kurdish forces, forcing her family to flee first across the border into Turkey and then further into Europe, where they currently live, in Germany.Christina Lamb is one of Britain’s leading foreign correspondents and a bestselling author. She has won 14 major awards including five times being named Foreign Correspondent of the Year and Europe’s top war reporting prize, the Prix Bayeux. She is the author of numerous books including ‘Farewell Kabul’, ‘The Africa House’, ‘Waiting For Allah’, ‘The Sewing Circles of Herat’ and ‘House of Stone’. She co-wrote the international bestselling ‘I am Malala’ with Malala Yousafzai and ‘Girl from Aleppo’ with Nujeen Mustafa. She is a fellow of the Royal Geographical Society, an honorary fellow of University College, Oxford and was awarded an OBE by the Queen in 2013.