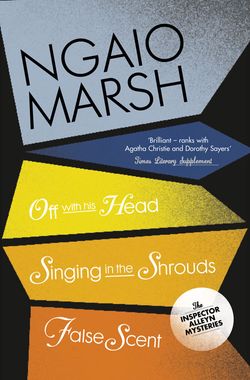 Commemorating 75 years since the Empress of Crime’s first book, the seventh volume in a set of omnibus editions presenting the complete run of 32 Inspector Alleyn mysteries.

OFF WITH HIS HEAD
When the pesky Anna Bünz arrives at Mardian to investigate local folk-dancing, she quickly antagonizes the villagers. But Mrs Bünz is not the only source of friction. When the sword dancers’ traditional mock beheading of the Winter Solstice becomes horribly real, Superintendent Roderick Alleyn finds himself faced with a complex case of gruesome proportions…

SINGING IN THE SHROUDS
On a cold February London night, the police find a corpse on the quayside, her body covered with flower petals and pearls. The killer, who walked away singing, is known to be one of nine passengers on the cargo ship, Cape Farewell. Superintendent Roderick Alleyn joins the ship on the most difficult assignment of his career…

FALSE SCENT
Mary Bellamy, darling of the London stage, holds a 50th birthday party, a gala for everyone who loves her and fears her power. Then someone uses a deadly insect spray on Mary instead of the azaleas. The suspects, all very theatrically, are playing the part of mourners. Superintendent Alleyn has to find out which one played the murderer…