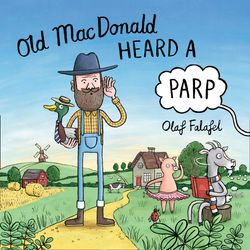 There are some VERY rude noises coming from Old Macdonald’s farm – who could be responsible?! Sing along to this side-splitting picture book adaptation of everyone’s favourite nursery rhyme.

Old Macdonald’s busy day on the farm keeps getting interrupted by some VERY rude noises … but who could they be coming from?! A hilarious and irreverent take on the classic nursery song from debut author/illustrator, Olaf Falafel, with helpful do-it-yourself instructions so you can parp along to your heart’s content!

Perfect for fans of The Dinosaur That Pooped series.

Picture book sensation and stand-up comedian Olaf Falafel burst onto the scene in 2017 when he posted a call-out to publish his his hilarious debut, Old Macdonald Heard a Parp, on Twitter. Olaf lives and works in London with his wife and two children, who are his biggest fans.