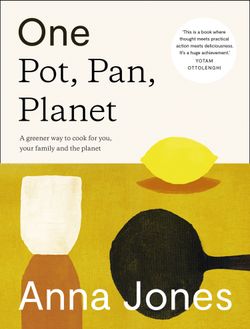 Award-winning cook Anna Jones blazes the trail again for how we all want to cook now: quick, sustainably and stylishly.

In this exciting new collection of over 200 simple recipes, Anna Jones limits the pans and simplifies the ingredients for all-in-one dinners that keep things fast and easy. These super varied every night recipes celebrate vegetables and deliver knock-out flavour but without taking time and energy.

There are one-tray dinners, like a baked dahl with tamarind-glazed sweet potato, quick dishes like tahini broccoli on toast, one-pot soups and stews like Persian noodle as well as one-pan fritters and pancakes such as golden rosti with ancho chilli chutney.

Onebrings together a way of eating that is mindful of the planet. Anna gives you practical advice and shows how every small change in planning, shopping and reducing waste will make a difference. There are also 100 recipes for using up any amount of your most-eaten veg and ideas to help you use the foods that most often end up being thrown away.

This book is good for you, your pocket and the planet.

Anna Jones is a cook, food writer and stylist. One grey, late-for-the-office day, she decided to quit her day job after reading an article about following your passion. Within weeks, she was signed up on Jamie Oliver’s Fifteen apprentice programme. She went on to be part of Jamie’s food team – styling, writing and working behind the scenes on books, TV shows and food campaigns. She has also worked with other well-known chefs, such as Henry and Tom Herbert (The Fabulous Baker Brothers), Stevie Parle and Antonio Carluccio, and cooked for royalty, politicians and LA school children alike. She lives, writes and cooks in Hackney, East London.